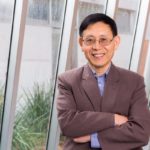 Dr Wenju Cai FAA, Director of the Centre for Southern Hemisphere Oceans Research (CSHOR) was among 24 top Australian scientists inducted today as Fellows of the Australian Academy of Science (AAS).

AAS Fellows are among the nation’s most distinguished scientists, elected by their peers for ground-breaking research and contributions that have had a clear impact.

Dr Cai said it was an honour to be recognised for his contribution to science, which looks at modes of climate variability (such as El Niño and the Indian Ocean Dipole) and their response to greenhouse warming.

“I feel very honoured, and tremendously thrilled knowing that there is strong recognition of the importance of the science that I and my fellow scientists do,” Dr Cai said.

He said that he looked forward to using his Fellowship to raise awareness of the science excellence at CSHOR, CSIRO and other Australian climate research institutes.

“This area of research is not only complex and challenging but also tremendously useful.”

“Our finding that major bushfires over southern and south-eastern Australia are preceded by the Indian Ocean Dipole is now used to forecast the severity of bushfires.”

Dr Cai’s research has been published in journals such as Science, Nature and Nature Climate Change, and has contributed to the Intergovernmental Panel on Climate Change (IPCC) reports used by policy makers around the world.

As a Chief Research Scientist at CSIRO, Dr Cai has led CSHOR since its inception in 2016 and has over 30 years of research experience. His service to the science community includes being co-Chair of World Climate Research Programme CLIVAR Pacific Panel during 2009 – 2015, and co-Chair of the CLIVAR Scientific Steering Group since 2019.